Smarter Subsea Handling have produced this animation illustrating 'ROVAR' - their concept for a subsea 'forklift' buoyancy module incorporating CBS. This You Tube video illustrates the buoyancy system being overboarded in a similar way to a Remotely Operated Vehicle. As it enters the water the dump valves are opened allowing water to fill the buoyancy caissons and with slightly negative buoyancy in water the system sinks slowly to the seabed.

Under the combined control of thrusters and buoyancy trimming the system locates its target load, attaches to the load and then by closing the dump valves and generating gaseous nitrogen from its liquid nitrogen source, water is discharged from the buoyancy chambers and the system and its load becomes buoyant.

The controls allow the system to 'hover' at a specified depth, in this case just a few metres above the seabed. Using its vectored thrusters the system can then be driven to its required location to despatch its load. The load is lowered to the seabed by slightly venting the buoyancy chambers of gas. Once the load has been safely detached, the system can return to pick up another load. Slight variations in buoyancy can be controlled from the surface to optimise its 'flight' through the water.

Gas is vaporised from its cryogenic state in a controlled manner to generate precisely controlled levels of buoyancy for use in marine lifting and lowering operations.

The system is currently designed to operate down to 1000 msw with plans to extend that to 2000 msw and beyond with alternate cryogens. 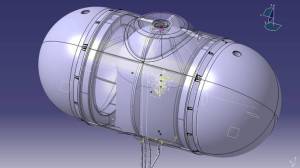 Our primary value propositions for controllable buoyancy solutions, irrespective of markets, and relative to other lifting and buoyancy technologies are: